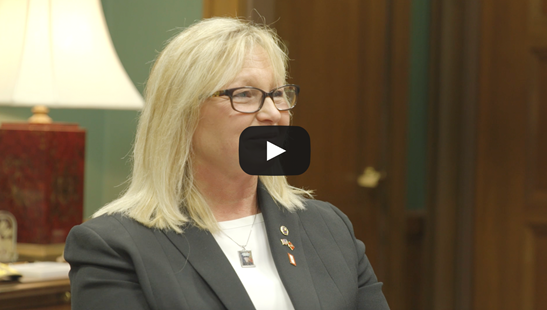 Sandy Terwiske’s son, Lance Corporal Alec Terwiske, was killed in action in September 2012 by an improvised explosive device while serving in the Marines in Afghanistan. Since then, Senator Young has worn a bracelet in honor of Alec.

“I said when you wear this, just promise that you will think of Alec and all the fallen and our military and the sacrifices that they make,” said Sandy Terwiske.

During last year’s State of the Union, Senator Young gave President Trump one of Alec’s bracelets.

“I pledged to her that I would remain ever faithful to the memory of Alec Terwiske. We’ve stayed good friends. We’ve dedicated a building together. I am proud to have Sandy as my guest to the State of the Union address,” said Senator Young.

Last year, Senator Young helped introduce a bipartisan resolution establishing the week of September 22-29, 2019 as Gold Star Families Remembrance Week to honor the families of fallen members of the Armed Forces. In 2017, Senator Young wrote a letter to the Navy requesting a building at NSA Crane in Jasper be renamed in Lance Corporal Terwiske’s honor. Senator Young joined the building dedication last May.

Sandy Terwiske and Senator Young wearing the bracelet honoring Lance Corporal Alec Terwiske before the State of the Union [Featured in the video].